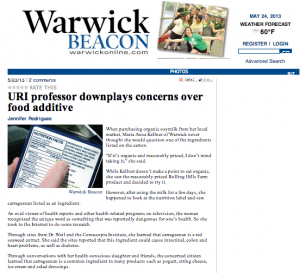 When purchasing organic soymilk from her local market, Maria Anna Kellner of Warwick never thought she would question one of the ingredients listed on the carton.

While Kellner doesnâ€™t make a point to eat organic, she saw the reasonably priced Rolling Hills Farm product and decided to try it.

However, after using the milk for a few days, she happened to look at the nutrition label and saw carrageenan listed as an ingredient.

â€¦She was so concerned, Kellner called the Hood Company, which owns Rolling Hills Farm. It took her a while, but she finally was directed to an employee in the Consumer Affairs department. Kellner said the employee told her the extract is used as a common thickening agent, but added that the company frequently gets calls concerning the ingredient.

Kathleen J. Melanson, associate professor of nutrition science at the University of Rhode Island, explained that concerns about carrageenan have been common since the 1960s and 1970s, but it is simply due to a lot of confusion.