Discovered in the 17th century in Japan and consumed for 200 years, agars are polysaccahrides consisting ofÂ galactose and anhydrogalactose units, partly esterified with sulfate groups (less than 5%).

Agar is extracted from two main species of marine red algae (Gelidium and Gracilariae) growing along the coasts of Japan, Korea, Spain, Chile, Portugal and Morocco.

The farming of agar is also developing with success in Indonesia and the Caribbean.

Total world production amounts to around 6,000 metric tons per year.

Food grade quality agar is obtained by a step-wise process. After careful washing, the product is dissolved in hot water under pressure at pH slightly below neutral to avoid degradation or in alkaline hot water, filtered under pressure at low concentration, recovered by syneresis after cooling and dried.

The interesting properties of agar are its high gel strength and the complete reversibility and stability of the gelation process (above or below 85 degrees C) when dissolved in water.

Consumption of agar for several centuries, coupled with many toxicological studies, has confirmed the safety of the product.Â

Under the code INS 406 (E406 in the EU), agar is a permitted thickening agent/stabilizer for food, authorized in all countries without limitation of daily intake (self limitation following GMP). It is listed as GRAS by the FDA. 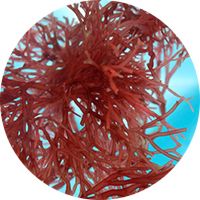