Carrageenan is a widely used, naturally occurring, water-soluble fiber made from red seaweeds that helps stabilize and add texture to a variety of foods and beverages. 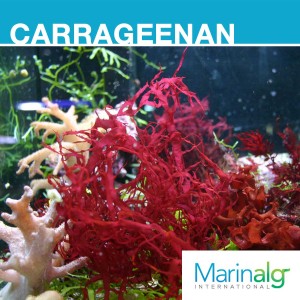 The edible red seaweed from which carrageenan is extractedâ€”sometimes called â€œIrish moss,â€ â€œDulseâ€ or â€œNoriâ€â€”is commonly found on rocks in coastal waters and has been used in food and drinks for centuries. Â Today, carrageenan is used to bind proteins together to stabilize foods like yogurt, ice cream, powdered creamers and deli meats.

Offering a vegetarian and vegan alternative to gelatin, carrageenan is an animal-product-free ingredient derived from nature that has been approved for use in foods and beverages by major regulatory and scientific bodies, including but not limited to: the U.S. Food and Drug Administration, the European Union, Health Canada, Food Standards Australia New Zealand and the Joint Food & Agricultural Organization/World Health Organization Expert Committee on Food Additives (JECFA), an independent and highly-esteemed international body reviewing food additives.

Carrageenan plays an important role in contributing to the economic prosperity of nearly 60,000 family farmers throughout the world.Â  Seaweed farming to produce products like carrageenan has become the preferred livelihood of many smaller farmers, particularly in tropical climates, because seaweed farming requires less capital and equipment and takes less time than other products.Â  Farmers are able to maintain their own seaweed, which means less displacement of families by larger farms and a profitable commodity for farmers in coastal communities in developing countries.