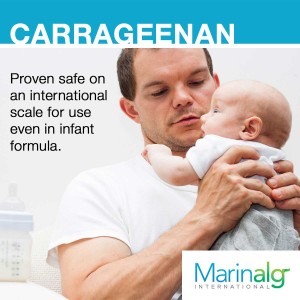 The regulatory and scientific bodies listed above allow the use of carrageenan in foods because the overwhelming weight of the scientific evidence shows that it is safe.Â For example, carrageenan has even been found to be safe on an international scale for use in infant formula.

After an exhaustive review of the body of science on carrageenan in July 2014, JECFA concluded that carrageenan â€œis not of concern,â€ (in other words, safe) for use in infant formula including formula for infants with special medical conditions.

Carrageenan is an important component in ready-to-feed infant formula as it ensures vital nutrients remain mixed throughout the product and available to infants.