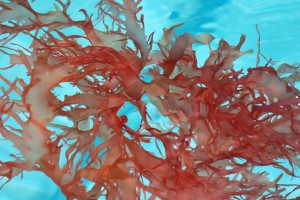 As a scientist, it is always interesting to read about the â€œscienceâ€ surrounding a subject.Â  Take the case of carrageenan as a timely example. Search the internet for â€œcarrageenanâ€ and youâ€™ll find scientific and scholarly papers, as well as a number of blogs and articles about health concerns. Take a deep dive into those scientific papers and articles and youâ€™ll find the key issues that add clarity to the discussion â€“ but it takes a deeper dive and an open mind to get to the heart of the issues.

First, letâ€™s consider how we consume carrageenan. Carrageenan is naturally-occurring carbohydrate polymer made of natural carbohydrates with minerals including potassium, sodium, magnesium, and calcium. It is seaweed. Carrageenan is extracted from natural seaweed and used in a variety of food, pharmaceutical and cosmetic products. It is used as an emulsifier and stabilizer due to its ability to act like a gel when left alone and effectively holds particles in suspension, such as herbs in a salad dressing and nutrients in a meal replacement beverage or infant formula. It can also bind moisture and retain fluids in ready-to-eat puddings, for example, preventing them from separating over time.

Carrageenan was approved for use in foods by the U.S. Food and Drug Administration (FDA) in 1961; the FDA published amendments to its approval in 1995 (21 CFR 172.620). The European Union also approved carrageenan for food use in 1995 (E-407 as noted in Directive 95/2/EC and amendments). The substance has been reviewed for safety and toxicology by the global authoritative body, the Joint FAO/WHO Expert Committee on Food Additives (JECFA), a total of six times to date. JECFAâ€™s conclusion following each review is that carrageenan is safe as consumed in foods and the committee has assigned it an acceptable daily intake level (ADI) of â€œnot specifiedâ€, which is the most favorable category of safety assessment.

Carrageenan has been thoroughly reviewed and is found to be safe. It is not carcinogenic, according to JECFA and the International Agency for Research on Cancer (IARC). It does not cause gastrointestinal tumors as one researcher, Dr. Joanne Tobacman of the University of Illinois College of Medicine at Chicago, reports. Dr. Tobacmanâ€™s research was published in 2001 and has been reviewed by U.S. and international food safety officials. The research reporting adverse health effects has been evaluated and rejected by two recent JECFA review teams (in 2002 and again in 2007), the European Commissionâ€™s Scientific Committee for Food (in 2003), and by the FDA (upon every inquiry and review to date).

These food safety authoritative bodies are not influenced by industry or activists. They are comprised of scientists who are asked to review the body of research surrounding a subject, and they conduct objective 360-degree assessments based on their training and experience. They have spoken repeatedly regarding the safety of carrageenanâ€™s use in food.

Carrageenan is safe as consumed and there should be no concern when a consumer sees carrageenan as an ingredient on a food label. Many informed and qualified individuals and organizations have spoken â€“ and they are clear.